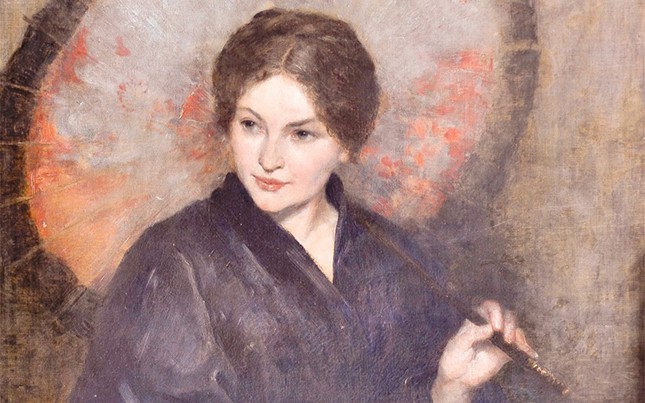 Peter Paul Biro Examination of Whistler’s Lady with a Parasol

In April 2013, Peter Paul Biro conducted a day-long, detailed condition examination of the oil on canvas painting, Lady with Parasol. Widely attributed to Whistler, the painting has long hung in the Butler Institute of American Art, in Youngstown, Ohio. Present at the examination was Dr. Louis A. Zona, Director and Chief Curator of the Butler Institute and two staff members. Before it was at the Butler Institute, research shows this painting was part of a well established California art collection: LA Times Article.

The painting has been owned by the same family for the past 70 years.

Founded in 1919, the Butler Institute is the first museum dedicated to exhibiting and preserving the work of American artists. Over the last 100 years, its collection has grown to encompass over 22,000 works by American artists such as Winslow Homer, Norman Rockwell, Albert Bierstadt, Mary Cassatt, Childe Hassan and William Merritt Chase, many of them masterpieces.

Peter Paul Biro’s examination was aimed at evaluating the painting’s physical condition and conservation history. In the examination, numerous high resolution photographs were taken. The painting was viewed by Peter Paul Biro under direct light and by using the ultraviolet fluorescence technique.

A copy of Peter Paul Biro’s examination report can be read below.

As per your clients’ request I visited the Butler Institute of American Art in Youngstown, Ohio, on Wednesday the 3rd April, 2013. Accompanying me was Mr. Laszlo Biro who is an expert art conservator. The purpose of the visit was to examine the painting belonging to your clients described as:

Present were Dr. Louis A. Zona, Director and Chief Curator of the Butler Institute of American Art and two staff members who assisted in moving and unframing the painting.

The painting was first examined framed in the museum’s storage room in visible light, then with the ultraviolet fluorescence technique. The painting was then unframed and moved to a bright hall with skylight so it could be viewed and imaged in bright natural daylight.

Many observations were made; numerous high-­‐resolution color images were taken which will be provided under separate cover.

The staff provided expert help and assisted us at every step. The examination concluded about mid-­‐ day.

The clients have provided a body of information about provenance and one previous examination report. These provided no background on basic conservation-­‐state issues, elements that are fundamental to approaching authentication issues. A more comprehensive review was required. Our examination was thus aimed at evaluating the painting’s physical condition and conservation history, aspects that have not been dealt with before. Without these, the question of correct attribution cannot be meaningfully addressed.

This technique can reveal later repairs such as retouching, removal or addition of varnish to a painting, otherwise not visible to the naked eye. No retouching was detected. The painting is thinly varnished and it has been cleaned at least once before. This is evidenced by the thinness of the varnish layer in brighter areas such as the face, the hand and the figure in general. A prior cleaning is further evidenced by paint loss and abrasion visible on the topmost surface of the knots of the weave of the canvas. This is clear in figure 7, where such loss is evident in the hair. Figure 7 is a visible light image. Also visible is contamination deposited in the space between the knots in the canvas. These, taken together, are clear indications of prior cleaning.

Several major aspects of the overall object were taken into consideration: the painting, the frame, the label on the frame and the added fiberboard support (and stretcher) to the canvas.

The stretcher is cut in two opposite corners to suit the purpose and then glued on the canvas-­‐coated fiberboard. This is seen in figures 2, 9, 11 and 12. There is visible evidence that the canvas was originally stretched on a stretcher with a horizontal brace between the long sides. That this cannot be the original stretcher is made clear by the fact that there is no evidence of a horizontal crossbar. It is also further evidenced by the presence of crack patterns around all four edges of the canvas that are so narrow as to suggest an original stretcher so thin that it could not have supported the painting.

The conclusion is that the painting was originally larger and stretched on a wider and stronger stretcher, as would be expected. In short, this is clear evidence that the painting has indeed been cut on all four sides. Figure 9 is clear indication of a slipped cut.

The attached canvas on the verso is curious as to the patterns all over. It could be the result of glue bleeding trough or it may be the back of another painting.

We are not addressing the inscriptions later added to the verso of the object.

The frame, according to its style is a typical Whistler frame. Whether or not this was the painting’s original frame cannot be known. It is entirely possible that the painting suffered some damage, possibly water damage that may have been the reason to cut the painting. In that case, the overall resizing would make sense. At this point it is not possible to tell short of further examination.

The frame bears a painted label (figure with typography indicating that it was not done in France due to the misplacement of the accent on the ‘à’ and the capitalization of the ‘L’ and ‘O’ of the word ‘Ombrelle’. The suggestion is that this label was made in an English speaking country.

The resizing of the frame is suggestive that it was of some age when re-­‐cut. Normally, on old frames, one expects the gap in the corners to be ‘V’ shaped. This is normal when the drying process starts       from relatively fresh wood. In this case however all  four  corners  of  the  frame  display  parallel adjacent edges as seen on figure 13. 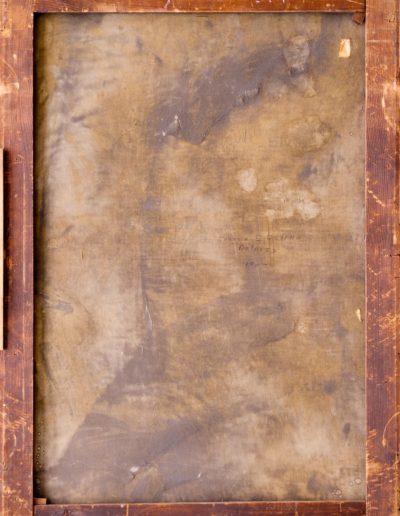 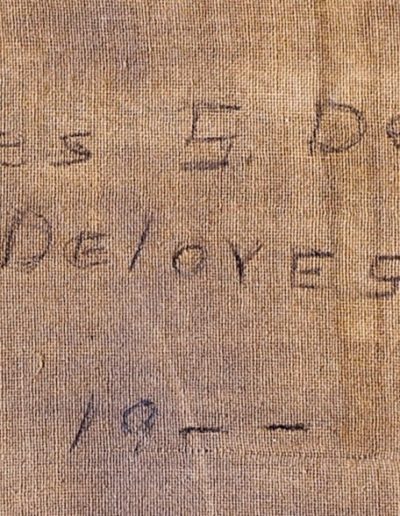 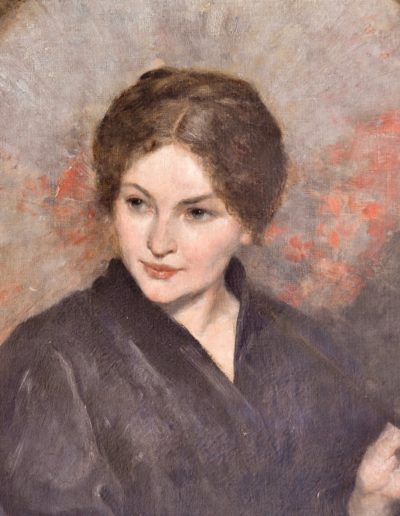 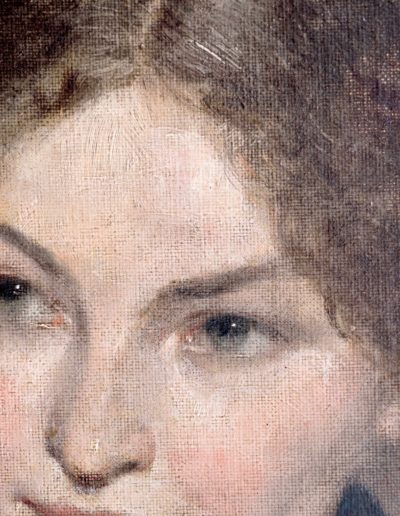 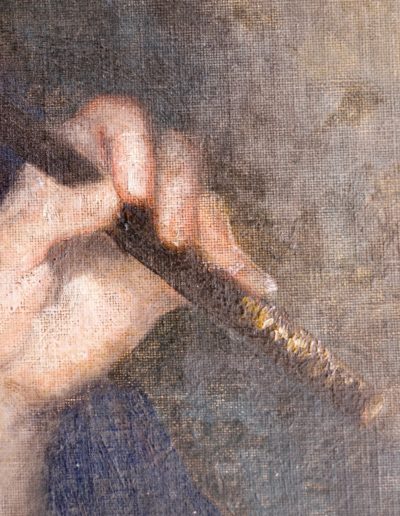 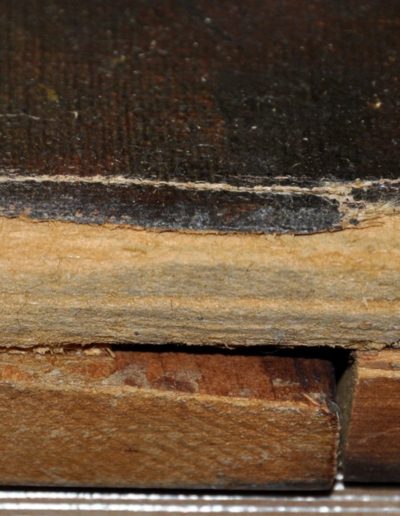 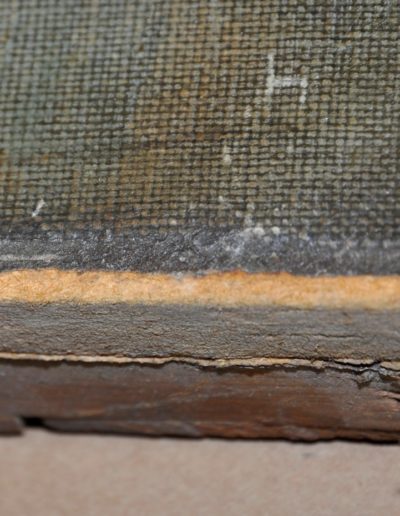 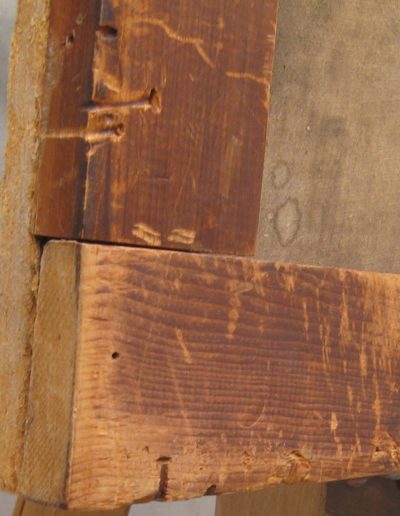 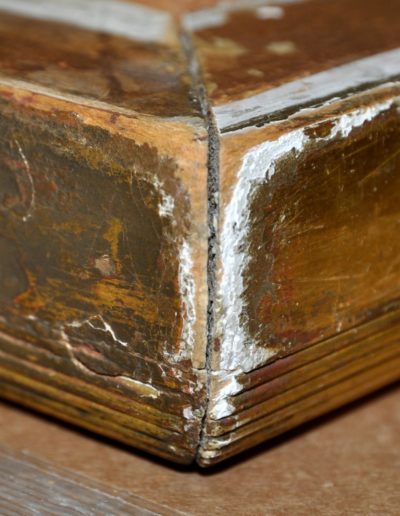 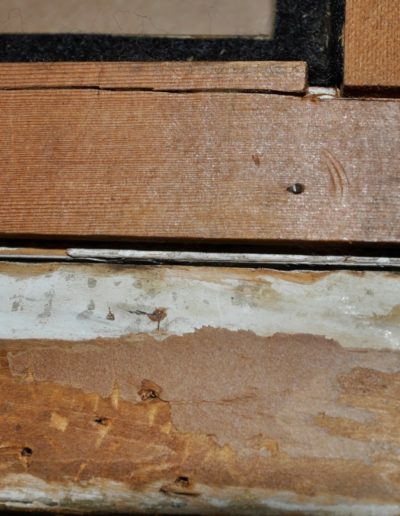 During the examinations and while studying the data no evidence was found to contradict the proposed attribution to Whistler. While the resizing makes this case more complex it may well have a reasonable and simple explanation.

Validating a James McNeill Whistler attribution is a difficult task; many tests will have to be done on the piece if it is to be accepted by the art community. It must be expected that all findings will be vetted and challenged. A proper presentation must thus address all possible objections and questions. It is also fundamental that the paint materials and their medium are not anachronistic with Whistler’s dates.

As indicated in previous correspondence, such extensive work cannot be carried out on location.

We recommend a full laboratory examination of the object. In the absence of such it is problematic to present this case to scholars of Whistler and should not be attempted due to the many unanswered questions.

Shipping to our laboratory, crating and insurance logistics can be handled by various companies or by the Butler. Our laboratory in Montreal is fully equipped to safely and expertly handle and store art objects.

Each of the colors present needs to be analyzed to identify both the pigments and the medium. The recommended analyses are:

The ground (priming of the canvas) requires the same above tests

The above requires several sets of samples to be collected as appropriate to the particular test. Once results are in, we need to compare them to materials actually used by Whistler. For this step, we have our own database of comparative reference materials as well as access to previous tests by various researchers published over the years.

Furthermore, the canvas must be examined for weave and age.

Multispectral imaging from infrared to ultraviolet (1100nm to 300nm) has to be performed. The results are important to explore the integrity of the painted surface and if any later repairs are present. Our multispectral scanner is ideal to produce excellent and reliable data.

From the results of the various materials analyses and the multispectral images it will be possible to establish the painting’s conservation history – i.e. what happened to the painting’s physical state since its creation.

It is obvious from the foregoing that the painting has a number of issues from a conservator’s point of view. These are summarized as follows:

The painting is on canvas, yet it had been mounted (glued) onto an almost half inch thick commercial grade fiberboard normally used in construction. A sheet of now soiled and stained canvas in turn was glued onto the backside of the board which is visible from the verso, possibly to create the impression that one is looking at the same canvas that is visible from the recto.

In addition, the whole assembly was glued onto a stretcher of similar age as the painting. The stretcher had been re-­‐cut and modified in size to suit the purpose. Judging from the presence of craquelure preserved on the canvas, the original stretcher had a horizontal crossbar.

There are a few holes and cuts visible on the verso. Some of these may have been accidental; some may have been done to explore the structure of the board, conceivably as part of past attempts to get answers.

It is not known why the canvas had to be mounted on the board, but one may speculate that perhaps the canvas and the original stretcher were damaged by water along the bottom edge, and mounting it on a board in this fashion was the chosen corrective measure. There is damage to the canvas with paint loss along the lower left edge that may be associated with water damage.

The painted surface was examined in normal light as well as UV. There is evidence of old varnish, generally uneven cleaning with some abrasion in the area of the face and the hand. The painting does not display characteristics consistent with recent conservation treatment.

That said, we are facing a situation that impedes the proper preservation of this painting and also puts its survival into question. We propose the following corrective measures:

Performing this procedure would of course, have the added benefit of providing access to the verso of the original canvas along with any information that may have been preserved. Conservation treatment would go concurrently with all the other facets of research that are proposed here. This insures that any information that comes to light can be properly explored and documented.