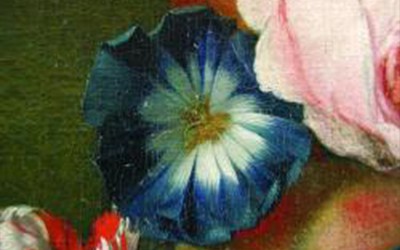 Wandering through the National Art Gallery in London, UK, or the Museo del Prado in Madrid, Spain, admiring the styles and techniques employed by the likes of Goya and Monet, we take for granted the authenticity of the paintings we are viewing and the accuracy of the descriptions that accompany them. But behind the scenes, the scientific analysis of these works of art has long been crucial to the preservation of our cultural heritage, bringing together disciplines such as art history and conservation science.

On 29 November 2005, a one-day meeting, organised by UK’s Royal Microscopical Society (RMS) and entitled ‘Art and Microscopy’, was dedicated to this cause. This followed a series of meetings held by the RMS in recent years on the theme of microscopy and microanalysis in different disciplines, such as forensics and archaeology. Held at the National Portrait Gallery in London, UK, the most recent event presented the various forms of microscopy used in the analysis of paintings, be it for pigment, paint sample, cross sectional, fingerprint, or materials analysis.

In view of the aim to conserve the paintings, ‘you would start with the simplest and least destructive, preferably entirely non-destructive, and possibly in situ methods [of analysis],’ says Dr Alison Crossley, Manager of the Oxford Materials Characterisation Facility, Department of Materials, University of Oxford, UK, and one of the scientific organisers of the meeting.

One conservation scientist who has used microscopy for the past 20 years to look at, and understand, paintings is Joyce Townsend, who works in the Conservation Department at the Tate Gallery in London, UK. In her presentation at the meeting, she looked at developments in the field since earlier examinations in visible light alone. Among the many techniques Townsend employs, ‘Polarising light microscopy, ultraviolet fluorescence and even staining techniques are tools she uses regularly to highlight mixtures of materials such as glue size and pigments, and the number of layers involved’, explains Crossley. Projects range from a detailed study of a single paint sample to comparisons of larger groups of paintings. The key therefore to accumulating a complete picture (excuse the pun!) is to use numerous and simultaneous analytical techniques.

Pigments ‘are characterised by their various properties, such as chemical composition, morphology, crystallinity, particle size, etc,’ says Crossley. This helps to provide information about the materials used. Optical and scanning electron microscopy (SEM) can be used to study the morphology of pigments, while polarised light microscopy is often applied to determine the minerals used in pigments.

One paper on ‘Advanced microscopical techniques for the characterisation of historical pigments’, presented by Professor Robin Clark of University College London (UCL), UK, discussed how over the last decade Raman microscopy has emerged as one of the best tools due to high spatial and spectral resolution, good specificity, sensitivity and the fact that many items can be examined in situ. It enables not only the analysis of the pigments but also reveals more information about the materials, such as the binding media. For example, when analysing Celtic artwork – the illuminated manuscript, Lindisfarne Gospels – using Raman microscopy, Clarke identified the presence of indigo, presumably made locally from woad. Woad is a plant native to northern Europe and the British Isles and is a source of the blue dye chemical, indigotin.

In terms of learning more about the materials, other approaches include infrared analyses to determine the presence of organic materials, and elemental microanalysis using an SEM with energy dispersive X-ray analysis, which can help identify the chemical composition of a material. Non-microscopic techniques such as X-ray diffraction also reveal information about the chemical, as well as physical, composition, especially crystallography. While mass spectroscopy techniques are employed for trace element analysis.

Another interesting tool applied is thermomicroscopy, which enables materials to be identified on the basis of their melting points. Crossley explains, for example, that ‘if the sample does not melt below 150ºC, this suggests that no wax has been used’. Townsend used examples from a painting of a young woman in ‘April Love’ (1855-6) by Arthur Hughes to illustrate this point.

Recently, there has been a trend towards more advanced techniques such as Fourier transform infrared (FTIR) microscopy with mapping, which can be used to establish the presence of carboxylates and carbonates in oil paint films with a spatial resolution of five microns, and Secondary ion mass spectrometry (SIMS) imaging techniques, which have been applied to surfaces to determine chemical information about sub-micron particles. ‘The use of digital images allow computer enhancement techniques to be used to bring out details which might otherwise be missed,’ says Crossley.

But why would anyone bother with trying to accumulate all this information? Surely it’s all about looking at the pretty paintings, not the story behind them?

For art historians and museum conservators, and even those studying historical materials and applications, this could not be further from the truth. Scientific analysis of artwork is crucial for recording data regarding the materials and pigments used by artists through the ages, and understanding the choices they made and their painting techniques.

Methodical microscopic investigation into the way artists worked from the Bronze Age through to the Roman period is relatively recent to the study of Western art history. At the meeting, Ruth Siddall of the Department of Earth Sciences at UCL compared recent findings with documentary resources of the time. It was discovered that a far broader range of pigments were employed than originally thought, from those sourced locally to those appropriated through international trade.

Therefore, by identifying the different minerals used in pigments, historians and scientists can also glean information about the establishment of trade routes, depending on when the painting was made. When analysing the Lindisfarne Gospels, Clark discovered that from 1400AD lazurite began to appear in the manuscript, indicating a trade route from known lapis lazuli mines in Afghanistan to the northeast of England.

Clark then went a scientific step further and studied the mechanisms of the colour in lapis lazuli. He ‘established that the presence of sulphur radicals in a cubic aluminosilicate cage causes the mineral to be blue rather than white’, explains Crossley.

However, the choices of materials were not only determined by availability, but could also be indicative of the wealth of the artist or the individual commissioning the painting.

Beyond the colourful history behind the piece, what if specialists are have difficulties in authenticating and dating the artwork? Knowledge of the materials and pigments used can help, but as Nicholas Eastaugh of The Pigmentum Project explains, this must be complimented by looking at their rate of usage.

Crossley describes how Eastaugh presented a case study on the pigment Prussian blue (see example in main image). ‘There is documentary evidence of small-scale production of this pigment in Berlin at the start of the 18th century with low usage reported in London. A recipe for Prussian blue was then subsequently published in London in 1724. The documented use of the pigment increased. However, there is insufficiant good quality data [of this]. Combining this with increased publications, because of enthusiasm for a new pigment, leads to skewing of utilisation figures and consequently poor statistics. This must be taken into account when narrowing down possible dates of paintings.

‘Identifying combinations of pigments can also be used to narrow down the dates and painting provenance. This is often a case of misattribution to a particular artist rather than a deliberate forgery,’ she adds.

Alongside chemical evidence, physical evidence obtained by microscopy can also help to attribute an artwork to an artist. Paul Biro of Forensic Studies in Art, Montreal, Canada, demonstrated examples of paintings by artists such as JW Turner where fingerprints of the painter were identified on the pieces.

Ultimately, our galleries would not be adorned with beautiful artworks if they were not conserved properly. A technique employed recently is Environmental SEM, which enables specimens to be examined in their natural state without coating or other preparation. This reduces the possibility of other artefacts being introduced in the sample and allows for faster sample throughout. Using this approach, museum conservators can identify alterations in the paintings, and (also using optical microscopy) areas of degradation where environmental pollutants have affected the material. This, along with knowledge of the materials themselves, could help to determine how best to handle and conserve the object.

Overall, Crossley insists that ‘the reliability and relevance of the analysis’ is important. ‘One minute trace of an unexpected material in a painting might point to a forgery or might be an expected impurity.’ Nor is this type of research confined to fine art. It covers most painted surfaces, such as in prehistoric caves, antique furniture and steam engines.

So next time you pop into your local gallery, take time to appreciate the combination of scientific techniques that keep artwork in tact and enable art historians and conservation scientists to understand the bigger picture. With advanced tools, reanalysis of antique paintings can help reveal more details, from the materials structure to the social and economic environment in which the painters worked.