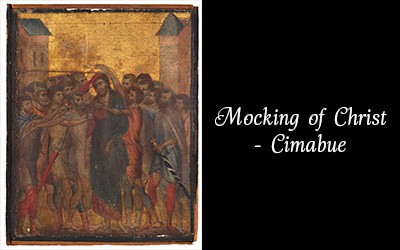 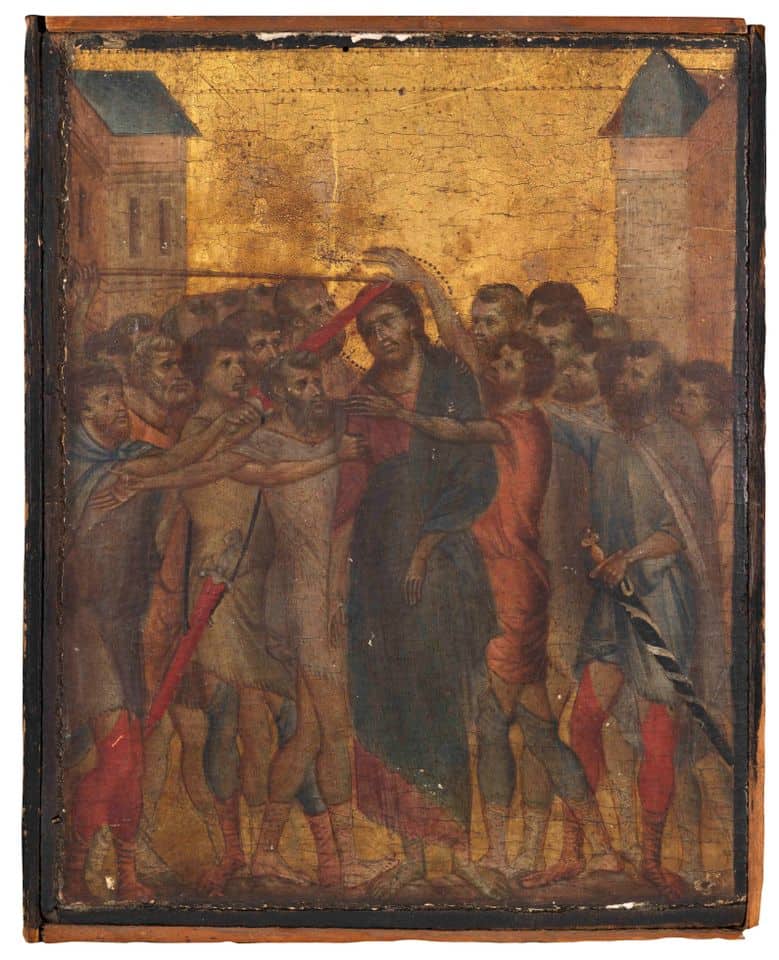 This small panel by the Florentine artist Cimabue was sold in France today for €24.1m to an anonymous collector

A 13th century painting of the Mocking of Christ, found in an elderly woman’s kitchen and attributed to the Florentine artist Cenni di Pepo (known as Cimabue, active 1272-1302), has sold today in France for €19.5m (€24.1m with fees).

Genuine Old Master discoveries are few and far between, but the market seemed to be behind the attribution of the unsigned, 10-inch-high tempera on poplar panel, which was auctioned this afternoon by Actéon in the northern French city of Senlis. The price makes it the eighth most expensive Old Master—and the most-expensive pre-1500 painting—to be sold at auction.

Estimated at €4m-€6m, the panel was competed by seven registered bidders, three of which were in the room—Italian dealers from Paris and London and a contemporary art gallery from Brussels. Francesco Ortenzi from London’s Moretti gallery was the winning bidder on behalf of an anonymous private collector says Eric Turquin, the Paris-based expert who authenticated the painting. The Alana Collection of Italian Renaissance art (formed by the US-based collectors Alvaro Saieh and Ana Guzmán and currently on show at the Musée Jacquemart-André in Paris) is thought by a knowledgeable source to be a likely buyer.

Turquin says interest in the painting “came mainly from museums or people close to museums with a new interest from buyers coming from the contemporary art world.”

The Paris-based dealer Giovanni Sarti bid on the painting, on behalf of a client, up to around €15m before leaving the contemporary art gallery from Brussels and Ortenzi of Moretti to continue. Sarti thinks the painting could have sold for more: “It’s very important and Cimabue paintings are so rare—this is the beginning of modern painting. People say Giotto was the father of modern painting but really, it’s Cimabue.” Sarti says the painting is in “very good”, albeit dirty, condition and thinks it may be pre-empted by the French state—should it choose to do so, France will have 30 months to raise the funds to buy it. “We have one Cimabue [The Madonna and Child in Majesty Surrounded by Angels in the Louvre] but still it would be very good to have another,” he says.

Auctioneer Philomène Wolf found the panel during a house clearance in the nearby town Compiegne in June. “It was considered special by the family, but they thought it was an icon,” Wolf told The Art Newspaper before the work was unveiled to the press in late September.

Only ten known works by Cimabue are recorded—all unsigned and all in public collections. Turquin, who was brought in to research the painting, describes it as “the only small-scale work of devotion that has been recently added to the catalogue of authentic works by Cimabue.”

Turquin believes The Mocking of Christ is part of a small polyptych by Cimabue—as for the other two parts, The Flagellation has been in the Frick Collection in New York since 1950 and Virgin and Child Enthroned surrounded by two angels, was bought by London’s National Gallery in 2000. The latter was due to be sold at Sotheby’s but was bought for the nation in a private treaty deal for around £7.2m. So, this is the first public auction result for Cimabue.

“It is of course an outstanding price for such a tiny painting but its condition, the richness of the palette, the marvellous liquidly of the drawing and the exceptional humanistic expression of the faces makes it probably the best of the three little panels,” Turquin says.

Before the sale, Turquin told The Art Newspaper he was so convinced the work was by Cimabue because of the pattern of worm tracks in the wood—the polyptych had been sawn in half and the worm holes matched up with the other parts. “It’s the same poplar panel,” Turquin said. “We have objective proof it’s by the artist.”

In Sarti’s opinion, The Mocking of Christ is as important, if not more so, than the Madonna and Child by the Siennese painter Duccio di Buoninsegna (who was slightly younger than Cimabue) which was bought by New York’s Metropolitan Museum of Art for $45m in 2004: “Personally, this is on a comparable level. Some scholars would say the Duccio is more sophisticated and Siennese but this is by the father.”