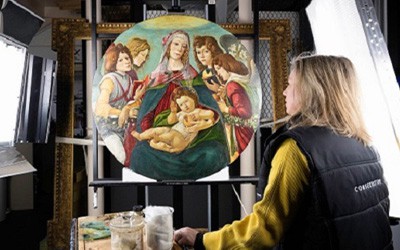 Recent cases demonstrate the role of forensic science in the authentication of fine art, particularly in combination with connoisseurship. Paintings by Botticelli and van Gogh, the authenticity and attribution of which had previously been called into question, have been authenticated with the help of X-ray imaging, pigment testing, and infrared analysis – along with analysis by fine art experts.

The Uffizi Gallery in Florence, Italy, houses the famed Madonna of the Pomegranate by Sandro Botticelli. A smaller, but similar version of this painting, had been retained in a private collection for over 100 years. When it was finally released to English Heritage, a conservation charity, its size and similarity to Botticelli’s more famous work led observers to question the authenticity of the work. The painting – approaching its 550th birthday – was covered with many layers of thick yellow varnish, increasing the difficulty of authentication. The varnish was so thick that some observers thought it to be “over painted.” Compounding this factor is the historical fact that Botticelli himself ran a workshop that copied his work for sale, which made it easier for modern – and past – fraudsters to sell forged copies.

The questioned Botticelli was purchased by South African diamond magnate Julius Wernher in 1897 and kept in his Georgian mansion; only recently has it been inspected closely by conservators. Restoring the artwork has taken several years and included removing varnish layers so thick that brushwork was obscured. The restored work was examined by Rachel Turnbull, English Heritage’s senior collections conservator, who opined: “stylistically it was too similar to be an imitation, it was of the right period, it was technically correct, and it was painted on poplar, a material commonly used at the time.” Confirming this conclusion, X-ray and infrared examination revealed an under-drawing, and an overpainted halo on the Christ child that was painstakingly removed, which are uncommon in imitations. The forensic testing implied a date of origin consistent with the dates when the Botticelli workshop was in existence. In tandem with this forensic examination, expert conservators from the Victoria and Albert Museum and the National Gallery London reviewed the newly revealed brushwork and concluded that the smaller Madonna of the Pomegranate is from the Florentine workshop of master painter Sandro Botticelli – though whether Botticelli himself worked on parts of the painting is not known. Reporting on this story may be found here, and the work may be viewed at Ranger’s House, London.

The van Gogh – entitled Vase with Poppies – was called into question when two experts, Bogomila Welsh-Ovcharov and Walter Feilchenfeldt, expressed concerns about the painting’s authenticity, in 1976 and 1990, respectively. In 2017, the Wadsworth Atheneum Museum of Art in Hartford, Connecticut and the Van Gogh Museum in Amsterdam subjected the painting to forensic examination. The Wadsworth conservation lab utilized digital x-ray and advanced infrared reflectograms, which revealed a self-portrait underpainting beneath the current composition, consistent with the style of van Gogh.  After this finding, the painting was sent to the Van Gogh Museum where researchers mapped the painting’s linen supports, performed a thread count of the canvas, and tested paint samples. Photographic documentation also revealed that the painting was exhibited at the inaugural Armory Show in New York in 1913. Vase with Poppies has been dated to 1886, around the time that van Gogh arrived in Paris. Forensic analysis in combination with connoisseurship authenticated this painting, settling decades of debate. The Director and CEO of the Wadsworth, Thomas J. Loughman, said “this extraordinary collaboration and harnessing of technology and professional discernment simply not available until now is a reminder of the opportunities today to both enrich discourse in the field and take stock in our collections.” Reporting on this story may be found here.

Technologies such as X-radiography, pigment testing, and infrared reflectography can reveal features of an object invisible to the human eye, such as changes made to a painting, or drawing under a paint surface. These recent examples demonstrate the useful role forensics can play in authentication and attribution, alone and in combination with connoisseurship.