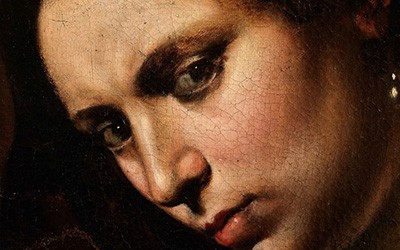 The painting, Judith Beheading Holofernes, was discovered in an attic in 2014.

A painting experts claim is a long-lost second version of Caravaggio’s Judith Beheading Holofernes (circa 1607), discovered in a French attic in 2014, will not be hitting the auction block this week after all. In the eleventh hour, Marc Labarbe Auctions in Toulouse, France, cancelled the planned June 27 auction after it received a private offer that was too good for the owners to pass up.

The buyer, a private collector, plans to show the painting in major museum, according to French publication La Tribune de l’Art.

“We received an offer that could not be ignored and which we communicated to the owners of the painting,” said Eric Turquin, the Parisian Old Master dealer and appraiser who authenticated the painting, in a statement. “The fact that the offer came from someone close to an important museum convinced the sellers to accept.”

The painting was estimated to sell for between €100 million and €150 million ($114 million–171 million). Unusually, it was being sold without a reserve, or minimum price. A press release from the auction house notes that the identity of the buyer and the purchase price are protected by a confidentiality clause, and that “the painting will consequently be leaving French soil.” “We had everything organized to make the auction a grand event open to the public but, our responsibility is to accept the decision of the sellers, our clients,” added Labarbe in a statement.

Labarbe discovered the painting in 2014, leaning against a wall in a dark, cluttered, leaky attic. It was not especially promising looking, but he gamely wiped down the surface with a damp cotton rag, revealing the dramatic painting below, the biblical tale of Judith’s brutal murder of Holofernes.

As soon as he wiped away the layer of dust, wrote Labarbe in the auction catalogue, he became convinced that “I had in front of me the most beautiful 17th-century Italian school painting I had ever seen in someone’s home.”

Soon after, the auctioneer took it to Turquin, who identified the piece as a lost work of Caravaggio—only the 66th one in existence. The find was triumphantly unveiled by the French Ministry of Culture in 2016, which placed a 30-month export ban on the work while it was examined by the Center for Research and Restoration of Museums of France, and painstakingly restored. “The time has come,” wrote Labarbe, “for our Judith to recover the rank that oblivion had denied her for awhile: that of a masterpiece by one of the greatest painters of all time.”

But there are still doubts as to whether the piece is truly by the Italian Renaissance master.

During an exhibition of the work at Milan’s Pinacoteca di Brera, where the Caravaggio attribution was presented with an asterisk, a board member resigned in protest. Caravaggio specialist Mina Gregori believes the painting is a copy by one of his followers, the painter and art dealer Louis Finson.

The painting’s adherents believe instead that Finson kept a Caravaggio original in his studio; the piece is mentioned in a 1607 letter from an artist visitor, and in Finson’s 1617 will. In 1619, Finson’s associate Abraham Vinck lists the canvas in an inventory. After that, its whereabouts are unknown.

Nevertheless, Turquin “never once had a moment of doubt” about the painting’s authorship, he wrote in the auction catalogue. “The incredible strength of [Judith’s] expression, the sensuality of her mouth, the energy of her movement, the opulence of the red curtain that works as the backdrop to the murder scene could only belong to the greatest of all painters, Caravaggio.”

As evidence of Caravaggio authorship, the catalogue offers the existence of pentimenti, which show the artist revising the composition as he works, plus a side-by-side comparison with a known Finson copy of the Renaissance great’s Judith. Details from two versions of Judith Beheading Holoferne, one a copy of Caravaggio by Louis Finson, the other the newly discovered painting, thought to be a second Caravaggio original. Photo courtesy of Mark Labarbe Auctioneers/.

Last month, in anticipation of the auction, the painting travelled to Adam Williams Fine Art in New York, where it was on view May 10–17. It was previously shown at London’s Colnaghi Gallery, as well as in Paris and Toulouse. The auction house estimates that 20,000 people have seen the painting since its rediscovery